I write this blog entry after completion of the performance. It was not intended to be that way but…..sometimes dancing gets in the way of writing!

There was a break in my choreographic process as I was performing another production, Jwala. And the way it has happened, with every performance of Jwala, I’m working with a different team of artists, completely difference circumstances both in terms of venue qualities and audience types. All of this affects the production and requires the necessary changes for each show.  To add, it is a fairly new production – originally created as a 55 minute piece, and now extended to 90 minutes. Anyway, all this is simply to say my attention and focus shifted to Jwala, at point when I was completely in choreographic flow of Sanctuaries.

When I returned to working on the Sanctuaries, jetlagged and with two other shows that I was involved in, I had limited time to finish the piece, and everything that I had created felt……not right! It was frustrating and made me realize that so much of what is created comes out of where you are in that moment of creation. The material that I had created only 3 weeks earlier (!!) felt un-instinctual and forced.

My Scientist character changed completely. All the movement analysis that I had previously worked on was completely scrapped for something more narrative-based, and straight-forward. Maybe it was because of time-constraint, maybe it was because I just wanted to be dancing after days of travelling and doing everything BUT dancing, but choreographing became less thinking, and more just playing the music and improvising the piece at a stretch. In each run, some things would stick and I would find myself repeating them, and in some I would surprise myself at what came out. I didn’t tape myself, I didn’t analyze, (usually parts of my choreographic process), I just danced what felt natural.

Whereas the beginning of the week had seen me dragging my feet and groaning my way to the studio to start choreography, mid-week had me excited and at times even a bit emotional when thinking of the piece.

Then, one by one, each rehearsal had an additional member. Wednesday night, I was joined by Aditya singing (live, as opposed to on a super-rough multi-track garage band), and Kasi on nattuvangam. On Thursday, I had the absolute pleasure of having Rajna on mridangam, which totally added Oomph! And on Friday morning, Shiva rounded us out on violin – which gave the varying layers of emotion and sensitivity, and the music sounded great and felt lovely to dance to. Aditya’s score is completely Carnatic (except for the deshthillana at the end), with characters and dialogues in Thodi, Bhairavi, Sahana, Nattai, Mayamalavagowla, and Abheri. It’s classical and really feels like it lends itself well to the moods and the narrative. 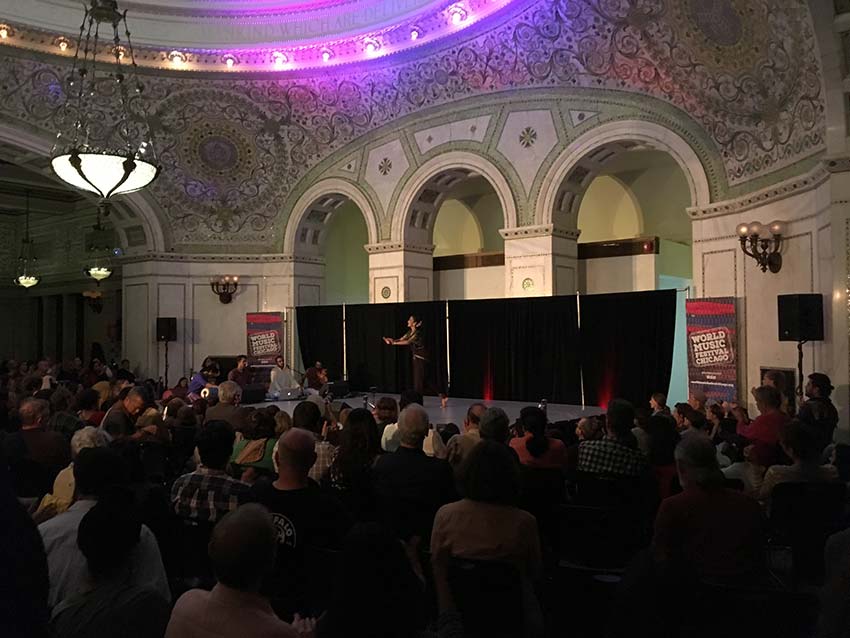 As I stood backstage just before going on and heard the cheers of the audience to the Emcee’s “our Chicago is a sanctuary city,” I realized this is my first “political” piece. In light of the recent DACA repeal, and all that has been happening both in our country and in so many countries of the world, the piece felt so pressing and relevant.

I couldn’t help but think back to my first semester as an MFA student at UCLA, when our first choreography assignment was a political piece. I had done something on body image, but used post-modern technique more than I did BharataNatyam. I had felt strongly on the topic, but the choreography was unvested and forced.

Here, I stood with a piece that felt meaningful, connected to me and the people around me, and….. “political!”

How much I have learned of the importance of image, metaphor, allegory – and their power as poetic tools of communication!

As we performed the piece that day, the audience sat all around us. It was close to midnight, and the hall was packed. It was a simple-stage, no theatrical lighting design, but a beautiful space, intimate and charged. Sometimes the attention and investment of the audience is palpable, and this was one such performance. As I danced the characters, I felt the emotions they felt, and thought of all that they represent today.

In my choreographic choices, I have always been more drawn to content which is more abstract, philosophical, and spiritual. Dance allows expression of this magical realm of experience. My feeling was – we live the mundane, why dance about it too?

But Gowri Ramnarayan, whom I have worked with closely, always has told me that it is difficult to carry an audience with you if you leap straight into the “intangible.” It’s important to start with the everyday – she always reinforces. I did understand her point, but the impetus to create such work only came after some time. Jwala, was probably the first full length work that was in fact inspired by the worldly – personal events in my life.

After our US election last year, the impact felt on our nation as a whole, felt so perceptible and tremendous that I felt some sort of creative throbbing waiting to find expression. Maybe Sanctuaries was that….

Anyway, none of this is to glorify the piece. What we performed on Friday at the Chicago WMF was literally a first draft, a piece that needs to be chiseled, edited, crafted, and wrung out thoroughly. But it was a start!